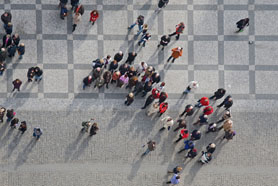 Even though a person has physically committed an offence, there may be circumstances that prevented them from realising that they were committing a crime.

This is not the same as being ignorant of the law, however; a person who in all honesty did not know that it was an offence to steal a car could still be prosecuted for stealing one. This is known as a mistake of law, and in these circumstances, the defendant will still be liable because it is up to the individual to understand the law, and whether or not their actions would be considered a violation.

In contrast, a mistake of fact defence becomes applicable when a person honestly believes in a set of facts that prevents them from realising what they are doing is an offence.

So, for example: a shopper puts ten items in her basket. She pays, but she has in fact only been charged for nine of her items, something that has escaped the attention of both our shopper and the shopkeeper. As she leaves the shop, she has the bad luck to be stopped by a security guard, who checks her receipt and realises the error. But although she has technically stolen the items, she may not be considered liable because she honestly believed that all the items had been paid for.

However, just honestly believing in a set of facts is not always a defence. It may be that although the defendant honestly held a set of beliefs that led them to commit an offence, these set of beliefs were unreasonable in the first place.

Another example. An employee of a gas company comes to your house to check your meter. But you, in all honestly, believe the employee to be a burglar and you defend your property by assaulting the employee. Now, you may have honestly believed that it was necessary to use force to protect yourself and your property, but these beliefs will be considered unreasonable if the employee was say, in uniform.

There are some instances where a mistake of fact, which was based on honest and reasonable beliefs, cannot be used as a defence; these are usually in cases of sexual offence, which are known as strict liability offences.