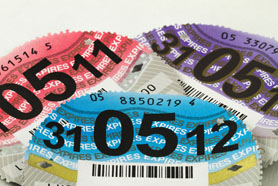 In order for vehicles to comply with the legal requirements for usage on the roads, they must have a valid tax disc on display in the windscreen. Without valid insurance and a valid MOT, it is not possible to obtain a tax disc. The punishment for not having an in date tax disc on display is usually an on-the-spot fine, which ranges from £80 to a maximum of £200. However, if a vehicle is not taxed there is also the possibility of a County Court Judgement, where the minimum fine is £1,000.

There are many ways that the authorities can catch people who have not taxed their car, which do not involve being stopped by the police. For example, the DVLA check their national database on a monthly basis.

They also hire firms to carry out wheel clamping in local areas on cars which do not have a valid tax disc on display. Should this happen:

Clearly, not having a valid tax disc on display is a costly business. Very few people are exempted from the stated road tax laws. People on the higher rate of Disability Living Allowance are exempted from paying road tax on their vehicle, as well as persons who are in receipt of the War Pensioners Mobility Supplement.

An MOT test must be passed by the majority of vehicles to ensure that they are safe for use on the roads. Most vehicles which are over three years old are required to pass an MOT test once a year. It is an offence to drive a vehicle without a valid MOT. But there are specific exceptions to this rule. For example, if a vehicle is being driven to a garage to undergo an arranged MOT test or if a vehicle is being driven to a garage after having failed an MOT test (in order to pass the test), the driver has not committed an offence.

Insurance and MOT are separate requirements. It is not legal to drive a vehicle to an MOT test without having insurance for that vehicle. However, driving without an MOT does not necessarily render your insurance invalid; insurers and the police are more likely to take into account the state of your vehicle, rather than whether it has a valid MOT or not. Although MOT is a legal requirement, the police will take into account your insurance status and the state of your vehicle if you are pulled over and do not have a valid MOT. Bear in mind that if they deem your car unsafe, it is likely that you will be found guilty of an offence, regardless of whether you are driving it to an MOT test or not.

When completing an MOT test, you should receive a symbol of authorisation, which is three white triangles on a blue background, from the issuing garage.