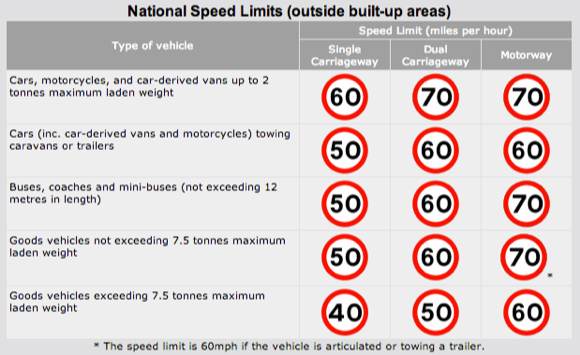 Table from Association of British Drivers

Merely driving over the speed limit for a short time – for example, if you are overtaking - will not amount to speeding. The minimum speed in order for it to be classified as speeding is calculated in the following way:

For example if the speed limit is 30mph, the minimum speed for which you can be penalised is calculated:

Where the speed limit is 30mph, then the minimum speed is 35mph for it to be considered as an offence.

I have received a Notice of Intended Prosecution

If you are caught speeding, you will be sent a Notice of Prosecution (NIP). This may be because your car was stopped by a police officer or it was caught on a speed camera. You should receive the NIP within 14 days of the offence being committed.  If you do not receive it within this time, you cannot be prosecuted in court unless you were stopped and notified at the time of the offence. But the notice will not be invalid if the reason you did not receive the letter within 14 days was because you did not inform the DVLA about a change of address. Also, small mistakes on the NIP will not render it invalid.  A valid notice should contain the name, address of the driver, time and location of the offence. It is important to keep in mind that an NIP does not mean that you will definitely be prosecuted but rather acts as a warning that you may face prosecution.

It is illegal to say that you were driving in order to take penalty points for someone else, even if the two of you are married. If found out, you can be prosecuted and may be found guilty of perverting the courts of justice. As a consequence, both of you may go to prison.

What are the consequences of speeding?

If you admit to speeding after receiving an NIP, you will be given a fixed penalty of £60 and three penalty points. The points will remain on your licence for three years. Points are awarded for various road traffic offences and if you receive 12 penalty points within three years you will be disqualified from driving for six months. You may be allowed to attend a speed awareness course instead of receiving penalty points in certain circumstances but you will have to pay for the course yourself.

You could be summoned to court up to six months after the offence. In this case, you could receive a fine of £1000. But if you were speeding on a motorway, you will be fined £2500 and receive three to six penalty points. If the offence was too serious for a fixed penalty, you will instead be disqualified from driving for seven to 56 days but this is at the court’s discretion. As a general rule, an instant ban from driving will be more likely if you were driving at over 45 percent of the speed limit.

Even if you were caught speeding on a speed camera which could be seen clearly, you are still liable for paying any fine.

What if I am new driver and I am caught speeding?

If you are a new driver - you gained your licence less than two years ago – you could receive six rather than the standard three penalty points, or your licence could be taken away.

Can I give a good reason for speeding?

The court will not accept any reason not to find you guilty of speeding but you can argue for your sentence to be reduced if you are found guilty. In that instance, you could let the court know that at the time of the offence there was no traffic, the road was dry and/or there was no alternative course of action other than to speed.

It is a criminal offence to drive if you have more than the legal limit of alcohol in your blood. This is known as your Blood Alcohol Concentration (BAC). It is tested in your breath or by taking a sample of blood or urine. The police can stop you and test your BAC if they suspect you have drunk alcohol before driving.

I have been found over the limit for alcohol

You may be taken to the police station where further tests will be done. If you were in charge of a vehicle while over the limit, you could be sent to prison for three months, have to a pay a fine of up to £2,500 or maybe be banned from driving. If you were actually drink driving or refuse to give a sample for testing, the punishments increase to six months in prison, a fine of up to £5,000 or a driving ban for at least year. If you were convicted of drink driving twice in 10 years, you could be banned for three years.

If you are driving carelessly while over the limit and end up killing someone, you could go to prison for 14 years, receive a fine, be banned from driving for at least two years or be made to take an extended driving test before getting your licence back.

If you commit two drink driving offences within 10 years, refuse to give a sample for testing or are at least two and a half times over the limit, you will be placed on the High Risk Offenders Scheme. This means you will have to pass a medical exam in order to get your licence back.

If you are convicted of driving, your employer can find out about it as it will appear on your licence and you may find it difficult to travel to certain countries. Your car insurance premiums will also go up, as you will have to disclose any convictions.

If you are involved in a road accident, you may also be liable for or have a claim for personal injury.