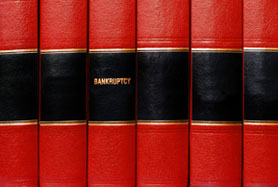 Bankruptcy is a legal status belonging to a person who has no way of repaying their debts, meaning creditors can no longer chase for repayment. It sounds like a simple solution, but the reality is very different and bankruptcy is usually undertaken as a last resort.

Bankruptcy is enforced by a court order, which can be initiated yourself or by any creditor who you owe more than £750 to. Once you have been declared bankrupt, the Official Receiver takes control of your money and property (although a law introduced in 2000 means that debtors are now able to retain their occupational pensions in all but the most exceptional circumstances). The courts will then deal with your creditors on your behalf.

Bankruptcy normally lasts for one year. Once discharged, you no longer responsible for any of the outstanding debts that were included in the proceedings. Not all debts, however, are eligible to be included in a bankruptcy order, including court fines and student loans.

Bankruptcy is, sadly, for many the only option. But it is not a quick fix. Although discharged after a year, bankruptcy remains on your credit file for six years and could well hinder attempts to get further credit during that period. The Official Receiver also has the power to sell most of assets, and you may have to make monthly payments from your income.

Other key facts about bankruptcy: