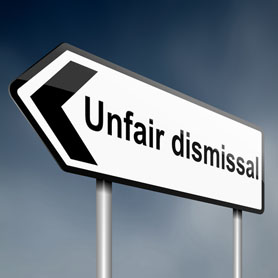 If you have been relieved of employment or forced out of work for unfair reasons, then you may be eligible to claim for unfair dismissal and could be entitled to up to £72,300 compensation.

If your employer had no valid reason to dismiss you (or gave a reason that counts as automatically unfair such as pregnancy), or if correct dismissal procedure was not followed then you may have a case for unfair dismissal and it is worth taking your case to an Employment Tribunal.

You also have the right to formally appeal any decision made at an appeal hearing.

Constructive dismissal is where an employee, as a result of the employer behaving unreasonably, is left feeling as though their only choice is to resign. The employer's behaviour in this situation must constitute a fundamental breach of the contract of employment. For example:

Do I have a legitimate claim?

The following sections should act as a guide giving the criteria which determine whether or not your case falls under the category of unfair dismissal.

Of employees, workers and the self-employed, only employees have the right to make an unfair dismissal claim. An employee is someonewho has an employment contract with an employer. Generally, your status as an employee should be fairly clear. But there can be cases where an Employment Tribunal finds someone to be self-employed, despite their belief to the contrary, so it is important to clarify your employment status if making a claim for unfair dismissal.

In order to be eligible to make a claim for unfair dismissal it is necessary to have been employed for at least a year. Legitimate leave, (eg, holiday or sick leave), does not count as a break in this year.

Laws governing constructive dismissal mean that even if you were not sacked from your job, and in fact resigned, then you may still be eligible to claim if your resignation was a result of the employer behaving unreasonably.

In addition, unless a fixed term contract is for more than a year, or the right to claim is waived in said contract, then its end can also count as a dismissal.

In order to claim for unfair dismissal you must be working in the UK and cannot be above the national retirement age.

There are also some professions which do not offer the right to claim for unfair dismissal. Examples include:

There is a three month window after the dismissal during which you are able to make your claim. After this, it is almost impossible to get your claim considered by a Tribunal. This three month period begins on the date of dismissal. If you are given notice, it begins when the notice period ends.

Naturally, the most important factor to consider when making a claim is whether or not your dismissal was in fact fair. The responsibility to prove that it was potentially fair falls on the employer in this case.

Legislation offers many categories of reasons for dismissal, classed either as potentially fair or automatically unfair.

This is when dismissal is:

Your dismissal is unfair if your employer did not follow correct or fair procedure in dismissing you. There is a model procedure provided to employers by the Advisory, Conciliation and Arbitration Service (ACAS) which acts more as a guideline than a rigid set of rules but is frequently referred to in employment tribunals.

Generally, an employer is expected to thoroughly investigate all cases and offer the employee an opportunity to demonstrate their case and defend their story before they are dismissed. The employee also has the right to appeal whatever decision is made.

It is always worth finding and consulting a lawyer when you feel that you are in a position to make a claim for unfair dismissal.

It is also worth consulting your trade union if you have one.