New legislation hopes to be a force for good and end the plight of victims given no choice but to marry. 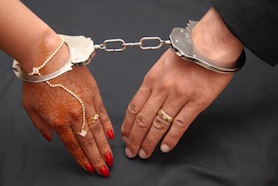 Testimonials from victims of forced marriage have circulated in the public domain for some time now. Often in these cases there is an underlying theme of deceit and psychological pressure.

It is a scenario that has been all too common in Britain, with the NSPCC recently releasing a statement highlighting that children as young as 12 were calling ChildLine about forced marriage. The number contacting them was up two-thirds on the previous year.

In 2012, Prime Minister David Cameron announced the decision to ensure a change in the law regarding forced marriage and called it an “abhorrent” act that was “little more than slavery”. This change finally came into force on Monday, and those complicit in forcing a marriage will run the risk of a seven-year jail sentence under the Anti Social Behaviour, Crime and Policing Act 2014.

Previously, courts have only been able to issue civil orders to prevent victims being forced into marriage. By criminalising forced marriage, ministers say the law will give victims the confidence to come forward and that it will protect thousands of people each year.

Home Secretary Theresa May has stated that this new law will give victims “a voice to speak out”. The law has been hailed by charity founders and victims of the crime as being “historical” and “the right move”.

However, there have been sceptical views amongst the appraisals. Firstly, many of the victims of child marriages are very young, so there is a difficulty in making sure that children understand that they do not have to go through with the marriage. There is also a possibility that many victims may not want to criminalise their parents.

Finding evidence that a marriage was indeed forced may prove to be difficult. Simply applying pressure for the victim to say yes may fall under arranged marriage as opposed to forced marriage, given there was a choice and not a threat of marriage.

There will also be challenges met within application of this new law. For example, take Scotland. Forced Marriage Protection Orders, which can be issued to prevent people being married against their will, were brought into Scottish law three years ago. But there have been no prosecutions over forced marriage since then.

This suggests that there is still a problem in assuring victims that they will be safe. Many victims, mostly women, have spoken about how they have been disowned by their family after abandoning the marriage as it was seen as shaming the parents. They are often ostracised within their cultural community, making it difficult to find friends and support. It also makes it difficult to meet a new person to start a relationship with as news about their past will have spread like wildfire, causing people to steer clear.

Aisha Gill of the University of Roehampton, who helped draft the new legislation, said there would be "challenges" implementing it:

"As with any law introduced, it may have unintended consequences. What we have to do is make sure victims are supported from the moment they report such an abuse, right the way through the court process, and post-court process, in terms of the outcome of a criminal prosecution".

Overall this is legislation that is long overdue and sure enough, it will be a slow burning process at first. But with good advocacy and education in hand, it will gain momentum and deter anyone from creating a victim in the name of marriage in the future.